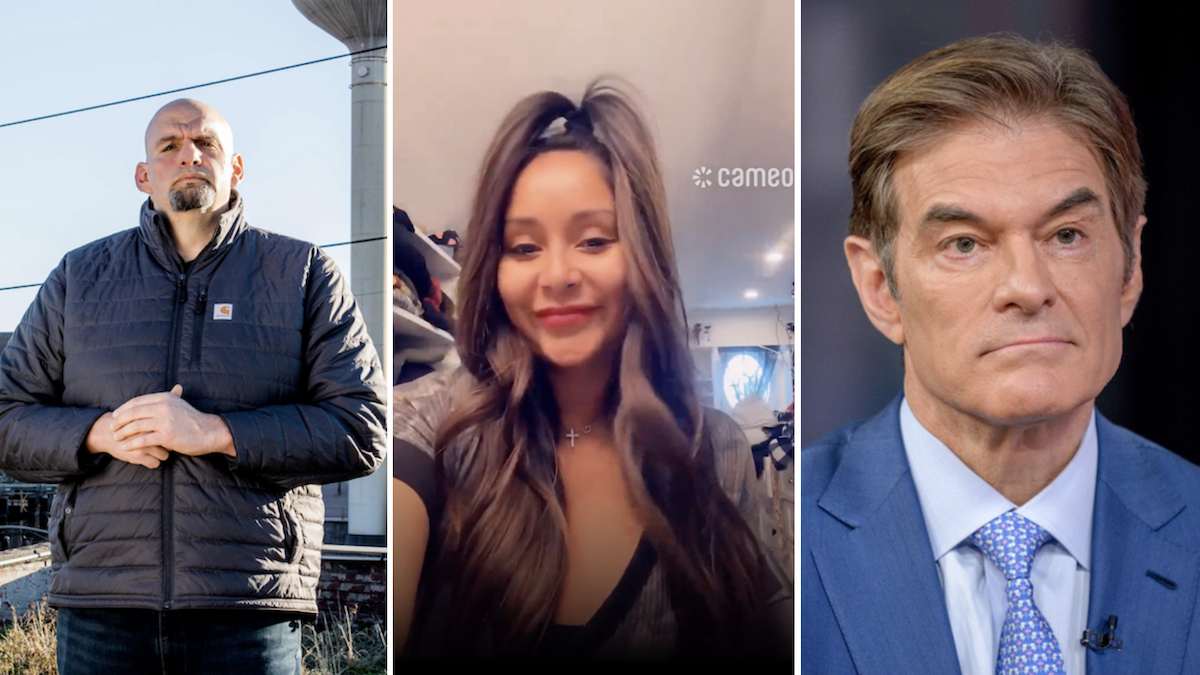 Despite living in New Jersey for several decades, Dr. Oz is running for the open Pennsylvania seat on the US Senate — something Pennsylvania Lieutenant Governor John Fetterman, his opponent, has strong feelings about. To make his qualms clear, Fetterman enlisted a little help from the Queen of New Jersey, Nicole “Snooki” LaValle, to remind Dr. Oz to never forget where he comes from.

“Hey, Mehmet, this is Nicole ‘Snooki,’” the reality star says in a Cameo video shared on social media Thursday, adding that she heard Dr. Oz “moved from New Jersey to Pennsylvania to look for a new job.” “Personally, I don’t know why anyone would want to leave Jersey, ’cause it’s like the best place ever, and we’re all hot messes, but I want to say best of luck to you. I know you’re away from home and you’re in a new place, but Jersey will not forget you. I just want to let you know. I will not forget you. And don’t worry, ’cause you’ll be back in Jersey soon. This is only temporary.”

It’s unclear whether Snooki was aware that the Mehmet she was addressing was Dr. Oz, or if she knew her message was intended to be used as a political smear. Still, her assurance that “this is only temporary” definitely sounds like the work of Fetterman. Watch the clip below.

A trained cardiothoracic surgeon, Dr. Oz rose to fame as a guest on Oprah Winfrey’s talk show in the 2000s before scoring his own show in 2009. His penchant for pseudoscientific weight loss tips led President Trump to appoint him to the President’s Council on Sports, Fitness, and Nutrition, and at the height of the pandemic, the doctor supported the anti-malarial treatment hydroxychloroquine as an alternative treatment to COVID-19 (it is in fact not). Before announcing his campaign for Senate last November, Dr. Oz switched his home address from New Jersey to Montgomery County, Pennsylvania, where his in-laws reside — though he apparently still spends a lot of time in his New Jersey mansion.

The Snooki cameo is the latest high-budget troll Fetterman has commissioned against his opponent. Earlier this month, after it was reported that Dr. Oz shot a campaign video in New Jersey, the Lieutenant Governor hired a plane to fly over the state with a banner reading, “Hey Dr. Oz, welcome home to NJ!” Meanwhile, Fetterman has been off the physical campaign trail as he recovers from a stroke he suffered in May.

JERSEY loves you + will not forget you!!! ? pic.twitter.com/YmaXfMpzUK

ICYMI… we had a big weekend ?

Daniel Kaluuya Is Still Working on a ‘Barney’ Movie

Daniel Kaluuya Is Still Working on a ‘Barney’ Movie