Never mind that just last week Animal Kingdom’s Craig and Deran were beating the stuffing out of one another. When little Nick was kidnapped by Renn’s drug-dealing competition in Sunday’s especially tense episode, the baby’s daddy ran to his kid brother as fast as he used to race toward a line of coke.

Deran not only came through for Craig, he helped his sibling abduct another drug dealer and sneak into a Nazi drug den, and took three slugs to the bulletproof vest so that Nick could be safely retrieved. “This ain’t over,” the scary Nazi drug dealer warned. “Boom,” replied Craig’s gun. “I think it is.”

Later, Craig and Deran hugged, their recent acrimony and fisticuffs behind them. And after putting Nick to bed, the boy’s parents all but shook from the events of the day and held hands like their lives depended on it.

IN OTHER DEVELOPMENTS… | After Amy returned Pope’s call and asked him to dinner, he was in such a good mood that he told J he’d sign the paperwork to turn the skate park into a (wink, wink) nonprofit. Aside from his elation, though, Pope was nervous as hell, going so far as to check out the restaurant that Amy had picked to see if it was conducive to conversation. (Good tip, Auge.)

Leaving the eatery, Pope was approached by Thompson, who claimed that Taylor was her son and he’d gone missing. Needless to say, it was a ploy to allow her to search Andrew’s car. That evening, Amy asked Pope to forgive her for judging him when he’d confessed to her that he’d murdered Catherine. Needless to say, he did. 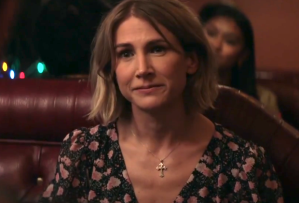 As Pope and Amy were on their way out of the restaurant, Thompson approached again, this time saying that she’d tracked her lost phone to Pope’s car. Now he was starting to get suspicious (and I don’t even think he spotted her eyeballing Amy’s license-plate number). When he got home and noticed a cereal box out of place, his suspicions grew, and majorly.

In an altogether different plot, J, enticing Penny to spend the day with him, met her addict sister, Cindy. Penny learned something new about J, too, when she noticed that his “chat” with one of the owners of the 4814 Diner had left him with blood on his sleeve. And in 1992, Smurf manipulated in vain to keep Julia and Baz from hooking up like crazy.

So, your reaction to “Incognito”? Does anyone else have the sinking feeling that Pope will be left with a choice to kill himself or Amy (to keep her from testifying against him)?

Both Sides of the Blade review – An exhilarating clarity of vision